Here you will find information about the online chatting activity «Chatea con una Astrónoma», talks at schools and for the general public, and more outreach contributions. If you are interested in the biweekly section about astrophysics I coordinate for the newspaper El Día, please visit «Gaveta de Astrofísica».

Since 2015, February 11th commemorates the International Day of Women and Girls in Science, as set up by the United Nations. Such vindication is fully supported by the Sociedad Española de Astronomía (Spanish Astronomical Society — SEA) and, particularly, by its Comisión Mujer y Astronomía (Woman and Astronomy Unit –CMyA), to which I belonged since September 2015 up to March 2020. Chatea con una Astrónoma was born as an 11F activity organised by the CMyA in 2018, and its success turned it into the insignia SEA activity for 11F.

I am the founder and coordinator of Chatea con una Astrónoma, an online chatting activity aiming at approaching the role of women in Astronomical research to the general public. During almost a full day every year (February 7th 2018, February 7th 2019, February 20th 2020), women astronomers are constantly available through an online platform to chat about our job as professional astronomers or our experience as women working in science.

32 women astronomers participated as chatters in 2018. That number increased to 62 and 57 women astronomers in 2019 and 2020, respectively. For the 2020 edition, I had the invaluable help of Silvia Martínez Núñez (IFCA, Santander) and Julia Suso (Universidad de Valencia) for the organisation.

Chatea con una Astrónoma is meant to be an inclusive activity: we receive chat requests from a variety of people of all ages, gender, and conditions, who can connect from every place in the world and have a private conversation with a professional astronomer.

Chatea con una Astrónoma is carried out in Spanish. Although it has been designed to reach everyone in Spain (time frames), we have chatted to people from many other Spanish-speaking countries. In 2018, 513 chats were hold. In 2019 we answered 973 chats, equivalent to 284 hours 42 minutes and 36 seconds of conversation. In 2020, the numbers were: 622 chats answered, 0 chats missed, and a total of 216 hours, 50 minutes and 10 seconds of conversation. 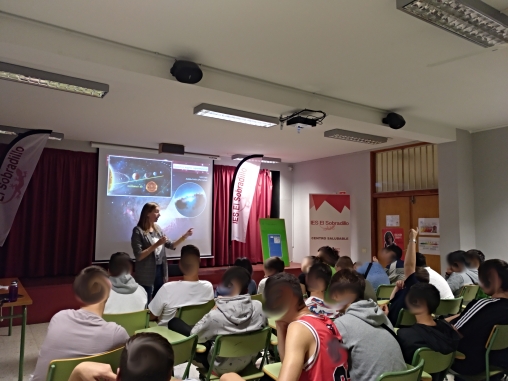 Every year, I deliver talks at various schools and explain to 12 years-old and older students how the work of an astrophysicist is, how we extract information from the light of astronomical targets, what galaxies and black holes are, and the contribution of many woman astronomers to research in Extragalactic Astrophysics. Many of these talks are programmed in the framework of 11F: International Day of Women and Girls in Science.

In 2019, the Instituto de Astrofísica de Canarias started the activity «Habla con Ellas: Mujeres en Astronomía» («Talk to Her: Women in Astronomy»), coordinated by the astrophysicist and communicator Nayra Rodríguez Eugenio. Habla con Ellas consists of online videoconferences with students at schools, usually during the astronomy/science/physics hours. Rather than talks in the usual way, Habla con Ellas is an interactive activity in which the students ask questions and chat with the woman astrophysicist. As part of the Habla con Ellas team, in 2019 and 2020 I have engaged with several schools from various Canary Islands as well as Mainland Spain.

Since 2020, I participate in the «Mujeres Científicas Canarias» project («Female Scientists from the Canary Islands»). 26 women scientists are featured in 26 roll-up panels distributed in high schools across the archipelago. The scientists visit the high schools so the students get to know one of the female researchers and her work in more detail. Mujeres Científicas Canarias is organised by the Government of the Canary Islands and Fundación Astronómica Observatorio de Temisas. You can find more information about this project here and here.

BRINGING ASTROPHYSICS TO THE GENERAL PUBLIC

I take every opportunity to participate in outreach initiatives, either series of scientific talks or scientific festivals, for which we develop activities for all-ages public. 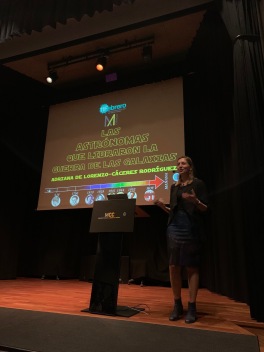 Among the activities for the general public, I would like to remark my participation in the 2019 and 2020 editions of the «Mujer y Ciencia» («Woman and Science») series of talks, held in various Canary Islands in February and March each year. Mujer y Ciencia is organised by Fundación Astronómica Observatorio de Temisas, science4families, and Investigadores de Las Palmas (INVEPA) in collaboration with the Government of the Canary Islands and other institutions. I particularly acknowledge the work of Arabela de la Nuez, teacher at the IES Alonso Quesada (Gran Canaria) and coordinator of the series. 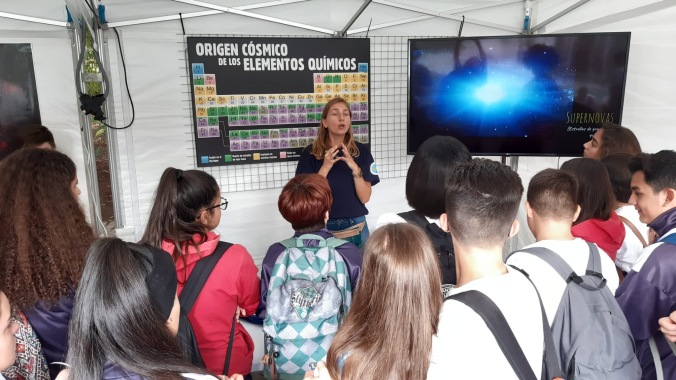 Check out our latest study on the 2D and 3D photometric properties of double-barred galaxies! Paper I focuses on the nature of bulges and Paper II analyses the properties of inner and outer bars.

C2D is out! Our new spectro-photometric decomposition code is ready and running. We have used it to study star formation in bulge+disc galaxies in CALIFA!

Check out our last paper! In this latest publication, we study the formation of two double-barred galaxies through a stellar analysis with superb MUSE data from the TIMER project.